What are the white moon and red moon cycles, and what do they symbolize for you?

For starters, it’s called a moon cycle because a woman’s menstrual cycle is said to be in sync with the moon.

An average moon cycle lasts around 29 days, just like the average time it takes a woman to complete a whole cycle.

There are four main phases of each, which correspond to one another. This is what a typical menstrual cycle looks like and how it links to the phases of the moon:

In ancient times, a woman’s cycle was honored and celebrated, while her bleeding phase was ritualized. Women of all ages came together in sacred circles and moon lodges. Getting your moon (period) was seen as a beautiful gift.

Bleeding would be a time for resting, journeying inwards, and tuning in to your intuition. Letting go of anything that didn’t serve you, resetting, and starting anew.

But the Patriarchy felt threatened by the power and magic that these women held within, which only magnified when they came together. So what was once seen as beautiful and pure became stigmatized and seen as taboo.

Women around the world today see their period as a hassle, a burden, and sometimes even a curse. Our sacred cycle has been belittled to no more than a means to reproduce.

But I can feel the energy beginning to shift. She is rising. We’re starting to fully awaken to the fierce power of our body and reclaim the magic of our moon.

The terms white moon and red moon symbolize the different ways a woman’s cycle is currently flowing with the moon. And this will often change throughout a woman’s life as she enters different phases.

You can figure out where your cycle currently is by starting to track it. Either use a traditional diary method (day 1 = the first day of your bleed) or one of the many apps available, like Natural Cycles. Use a website like time and date to see where the moon currently is, where you live, and where your cycle is in relation to her. If you have a fairly regular cycle, a pattern will emerge for you after a couple of months.

I’ve been tracking my menstrual cycle for close to four years, which has given me so much knowledge and insight into my body’s natural rhythm. I feel empowered knowing exactly where I am in my cycle. Knowing what may be going on physically, mentally, emotionally, and spiritually at that time and why. And being able to plan my days, weeks, and months in harmony with the natural flow of my energy.

Because this cycle mirrors the traditional cycle of the moon and mother earth, a woman with a white moon cycle is said to be in the Mother phase of her life. Either she wants to get pregnant and start a family or focus on nurturing and raising her children.

This is because the full moon is considered to be the earth’s most fertile time. So when a woman goes through the most fertile stage of her cycle simultaneously, both energies align and are magnified.

Women on a white moon cycle pull energy inward towards them and harness this to replenish and deepen their emotional, mental, and spiritual energies.

If you’ve found yourself on a white cycle now, it doesn’t necessarily mean you’re in the “mother” phase of your life. A white moon cycle could also indicate you want to give more energy to yourself right now. This may be your intuition gently reminding you that you need more love and care right now and to devote your resources inward instead of outward for a while.

White moon women were often favored by the patriarchy (and still are today) because all their energy was solely focused on the men and children in their life.

In ancient times these women were the priestesses, the healers, the witches, and the medicine women. In contrast to the white moon, these women are focused on channeling their creative energy outward.

These women may also be mothers and raising children. But they are focused on and passionate about being in sacred circle with their community and teaching and leading others.

Women with a red moon cycle have a deep desire for self-actualization, self-growth, creativity, business, mentorship, and development. Everything they learn and experience helps empower them from within, enabling them to empower the women around them.

The red moon cycle is also said to offer a deep connection to a woman’s sexual energy. Powerfully potent energy that the Patriarchy has tried (and continues) to disconnect us from.

A woman on a red moon cycle is a woman of great power. So it was these women who were labeled witches; and punished, vilified, and ostracised from society. 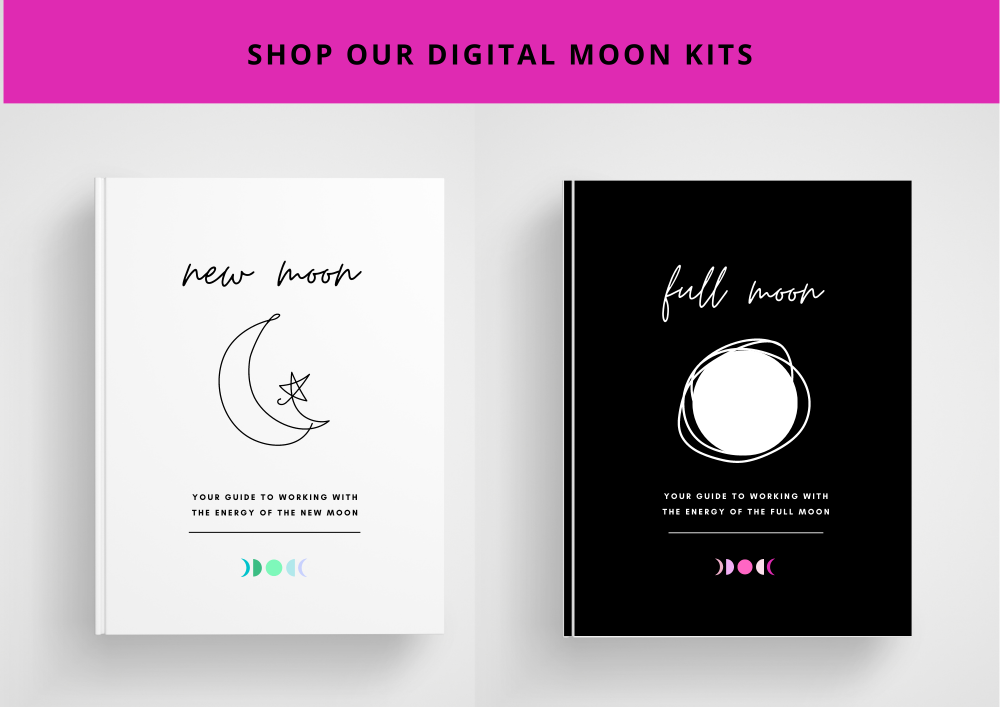 What if my bleed keeps changing between the white moon and red moon cycles?

This is completely normal for some women. I cannot say for certain what this means for you, as every woman has her own experiences and journey that she’s on. But this alternation between a white moon and a red moon cycle is sometimes known as a Wise Woman Cycle.

There isn’t much information on it out there, and it can be a little disorientating, continually shifting this way. But if you’re open to working with what comes up for you, you’ll experience new insights into your own sacred cycle as well as the moon cycle and the subtleties of the different combinations we can experience.

Being able to experience the gifts and wisdom of both cycles so regularly can be beautiful—if you choose to lean into it.

It’s absolutely nothing to worry about. Embrace your natural rhythms. Immerse yourself in the magic of the moon. Open yourself to the wisdom that awaits you.

Is one cycle better than the other?

No! There is no better or worse when it comes to your sacred cycle. There is simply one or the other.

There’s a common misconception that a red moon cycle is inferior because it doesn’t align with the natural phases of the moon. But I promise it’s not.

There’s also the worry that your energy will be higher and lower at the wrong time of your cycle. More expansive at the new moon—traditionally a time to journey inward and rest. And more internal at full moon – a time to expand, flourish and celebrate.

But this isn’t a problem.

It’s how you choose to work with your energy and the energy of the moon that matters.

I have been on a red moon cycle for the past four years—ever since I began tracking my cycle.

When I first found this out, I wanted to know how to “fix” it and get my cycle back in sync with the moon. I didn’t realize that it didn’t need fixing, and I was already very much in sync with her.

But then I started to read more about the white moon and red moon cycles. I began to deepen my understanding of my own cycle, as well as the moons.

I realized that being on a red moon cycle made complete sense for where I was (and still am) in my life today. My focus is on continual self-learning and inner growth. I’m deeply in communion with creativity. I’ve been growing and nourishing a business that centers on empowering women.

Can I see kids in my future? Maybe someday. But right now, my attention and energy are elsewhere. And that’s beautiful. The same way desiring to be a mother and devoting your energy to nurturing your children is.

When my energy is low during the light of the full moon, I draw my attention to illuminating and expanding internally. And when my energy is high during the darkness of the new moon, I channel that into shedding whatever needs to go, resetting, and creating new, supportive intentions for this cycle.

What if your cycle doesn’t follow the white moon or red moon cycles?

If you don’t follow the white moon or red moon cycles, there are a couple of other possibilities.

This means you bleed when the moon is waxing (transitioning from a new moon to a full moon).

A pink moon cycle may represent a transitional phase in your life. When the moon waxes, it’s going from darkness and reflection to light and expansion. So, this may mean you’re leaving a period of rest or shadow and coming into your strength and power.

This means you bleed when the moon is waning (transitioning from full moon to new moon).

A purple moon cycle also represents a transitional phase but in the opposite direction. When the moon wanes, it’s going from fullness and strength into reflection and rest. So this might symbolize you entering a quieter stage of your life or exploring your shadow self.

It could be a time to get clear on what’s no longer serving you and needs to be released or a time to retreat into your cocoon. And this is vital before you can emerge again, revitalized, and ready to spread your wings and soar.

What if I have an irregular cycle?

Don’t worry—many women have irregular cycles for a number of different reasons. This is due to an imbalance of hormones in the body, which is caused by various factors like diet, exercise, quality of sleep, stress levels, birth control, and environmental toxins.

Seed cycling is a natural way to balance your hormones, and can also be really effective if you’re transitioning off birth control. But this practice should not be done in isolation. Eating a healthy diet, getting enough good sleep each night, and reducing your stress levels as much as possible will all help you regulate your cycle.

Regardless of what cycle you’re in, I invite you to reclaim your moon and the days when you bleed. Give your body what it needs during this time—particularly the first two or three days, which are the most intense.

For a long time, we’ve been taught we need to be like men if we want to be treated as equals, but our real strength can be found in what makes us different. Not weaker or stronger, just different.

So don’t try and “power” through, and carry on functioning as normal if you’re experiencing discomfort or resistance. This is your body speaking to you.

Give yourself permission to do what feels good for you. That might mean working from home, being on your own, having a space day or two, canceling plans with friends, and slowing right down.

You may find you crave alone time or company with your girlfriends. You might really want to move and stretch, or you might want to curl up into a ball and sleep. Chocolate might be what you have for breakfast, or you might not have an appetite at all. And you might want your boyfriend not to touch you, or you might be really hungry for sex.

It’s all okay. Bleeding is both beautiful and sacred. It’s emotional and liberating. It’s power, and it’s magic.

And it’s time we reclaimed it.

Got a question or a comment on the white moon and red moon cycles?

Post it in the comments section below, and I’ll get back to you as soon as I can.

Immerse yourself in moon magic with our other articles:

Written By
Shani Jay
More from Shani Jay
Is every man a cheater? No. I know there are loyal, faithful...
Read More