I graduated with a BA in Fashion Design back in 2012. That summer, I applied to hundreds of jobs, in design, pattern cutting, buying, and merchandising. And all I got was stone cold silence, or one no after another.

No, you haven’t made it to the next round.

No, you’re not what we’re looking for.

The only job I managed to successfully get was a job as a designer out in Zhengzhou, China. It was paying £800 a month, with my accommodation costs taken care of. But I was afraid to move somewhere where people are controlled even more than they are here in England.

After talking it over with my dad, we both decided that may not be the best opportunity. In hindsight, I wish I had said yes to it, because I’ll never know what I missed out on. But I turned it down, and continued my job search.

I struggled for a few more months. My bank account was bleeding out fast, and my self-confidence, too.

One day, while waiting in my local bakery before catching a train, I accidentally ended up scoring myself a part-time job there as a shop assistant. I had nothing else going on, and welcomed the money, so I said yes.

Part of me felt embarrassed coming back to the village I grew up in after graduating, only to be working as a shop girl/waitress in the bakery – a job I could’ve got six years ago, without racking up £20k in debt. But I swallowed my pride, rolled up my sleeves, and got on with it.

I became a pro at bread slicing and sandwich making and doughnut eating.

I was also working part time (remotely) with a fashion startup, for free, because they weren’t able to pay me. But I was learning a lot, and valued that; plus I was hoping that eventually it would lead to a full time, paid gig.

I continued with my job hunt, sending out applications every week. And more rejections came flooding back.

It was really hard not to let all those no’s break my spirit. I thought to myself, I’m creative, intelligent, and hard working; and have an abundance to bring to any business.

Why couldn’t they see that? Was I deluded?

A few months passed, and my dad reminded me of our holiday in Sri Lanka two years before, when we visited two design and supply companies. It was really exciting seeing actual products being completed on a production line, for big companies like M&S and Victoria’s Secret; and to soak up the energy of a real design studio.

I met with the design manager of Hidramanis, and she offered me an internship after I graduated on the spot. I was still at university, and had never thought of working abroad, so I was a little surprised but also very grateful. And I never thought about it again, until dad mentioned it a couple years later.

So I emailed her with a copy of my portfolio, we had a Skype interview, and she asked me when I wanted to join them, and for how long.

I couldn’t believe that someone was finally saying yes.

In February 2013, I flew to Sri Lanka to begin my design internship, and lived and worked there for the next six months. The pay was terrible, but I was learning so much about the industry, and enjoying exploring a new place all on my own. Plus, I had a few relatives who lived out there who I’d never met, or had only seen when I was little, and was able to spend more time getting to know them.

As the end of my internship quickly approached, I was offered a full time job to continue working out there. But once again, the pay wasn’t good, and I made the difficult decision to move back home, and try my luck at finding a job with all the experience I’d gained.

All of a sudden, I found myself back to square one. Filling out and sending off job applications, and getting a bunch of no’s again. It was as if my design experience in Sri Lanka somehow didn’t even count.

Around this time, I started writing, here and there, just for me. I never submitted anything to anywhere, because I didn’t think I was ready or good enough. I would spend hours reading inspiring articles online, and devouring the pages of books. The more I read, the more I wanted to write. But I didn’t think I could ever be as good as them. So I put that dream to bed for a few more years.

As a last resort, I dug out all the contacts of all the designers and buyers I’d met in meetings while at Hidramanis. They were mostly from high street companies like Tesco & ASDA. I sent a few emails out asking if they had any job openings; praying someone would respond.

And one of them did.

I spent the next seven months working as a temporary trainee buyer with Tesco F&F, before moving on to Primark and getting an official trainee buyer role. And I spent two and a half years there, before I was finally ready to admit to myself that this wasn’t what I wanted at all.

I was fed up of giving all my time to a company where I was just another number. Easily replaceable. And not valued or respected.

The childhood illusion of studying hard, getting good grades, so you could go to university, then get a job and climb the career ladder and live happily ever after, had officially been shattered for me.

I mean, that’s the whole point of school, right? You go to school so you can eventually convince someone to give you a job you don’t really want.

Because let’s be honest – most people don’t like their jobs. If you do, then good for you. I think that’s great. You should definitely stay in a job you love.

But for the rest of us, it’s mostly dealing with obnoxious, micro-managing bosses and backstabbing co-workers. Overworking yourself to the point of overwhelm or exhaustion. Celebrating Fridays, and living for the weekend and your measly two week vacation.

You sign away the best years of your life. And for what?

All I kept thinking was, what’s the point of all this?

It doesn’t matter if I show up tomorrow, or not.

Why am I taking orders from people I don’t want to trade places with?

Why am I wasting my time doing work each day that doesn’t matter to me; just so I can take home a mediocre paycheck at the end of each month?

It has only recently dawned on me that I lost so many years of my life trying to be employable. Waiting, hoping, and praying that someone would give me a job.

I wouldn’t say I regret it, because at the time, I didn’t know any better. I probably wasn’t ready to start a business, and try and make it on my own. And I wasn’t pissed off enough with the system yet to say, fuck this shit, I’m out.

There is no passion to be found playing small—in settling for a life that is less than the one you are capable of living.
– Nelson Mandela

Eventually, I found the courage to trust my intuition and break free. I earned money as a freelance writer, wrote and published a few books, became a coach, and travelled the world at the same time. Last year, I launched a business – She Rose Revolution – which is an empowering publishing platform for women.

I receive emails and submissions quite often from women who have just graduated. They’re often in the creative space, or are aspiring writers, and are struggling to find a job.

And part of my wants to virtually shake them and say, stop.

Stop waiting for someone to give you a job.

We are living in a time where it is possible to do pretty much anything you love, and find a way of making money from it. It might take months or years before that happens – yes. But would you rather invest that time in a company who doesn’t value you, and can fire you tomorrow, or in yourself?

Here’s what they don’t want you to know: They need you; you don’t need them.

The most common way people give up their power is by thinking they don’t have any.
– Alice Walker

If you want to be a designer, then start designing and making stuff. Sell what you make on a market stall or at a festival, or on etsy. Build a website, or get someone to build one for you.

If you want to be an actor, then start acting. Get a bunch of friends together, and start a sitcom or make a movie on a shoestring budget. Put it on YouTube, or pitch it to Netflix. Better still, start your own Netflix for upcoming actors and directors and screenwriters, because who the fuck are Netflix anyway?

If you want to be a writer, start writing. Pitch your writing to the sites or magazines you love reading. Email a bunch of businesses offering your freelance writing services. Start a blog or a website or your own magazine. Write a book. Don’t wait for someone to publish it, publish it yourself.

Do something. Anything. Just stop waiting for someone to give you a job.

Because you don’t need to wait for permission from someone to do the thing you came here to do. 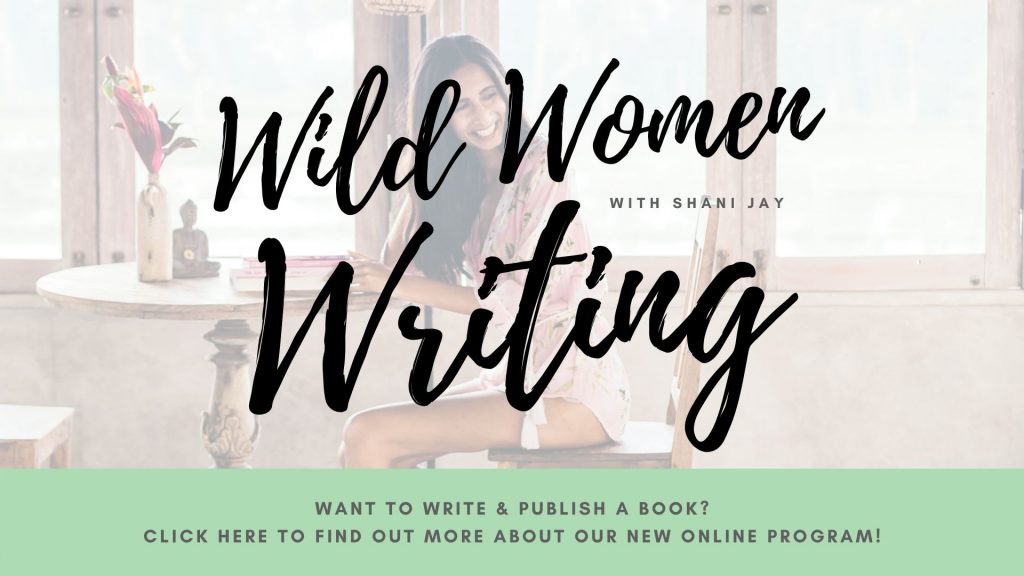 Written By
Shani Jay
More from Shani Jay
Yesterday morning, I spent around an hour tending to my face. I...
Read More

Get your copy of the book here!